The figure shows an example of the monthly Greenland surface type (GST) product for July 2014. The number of class occurrences + standard deviation is provided for each pixel. The number of days when a pixel is cloud-free serves as a measure of the reliability of the classification for each month. 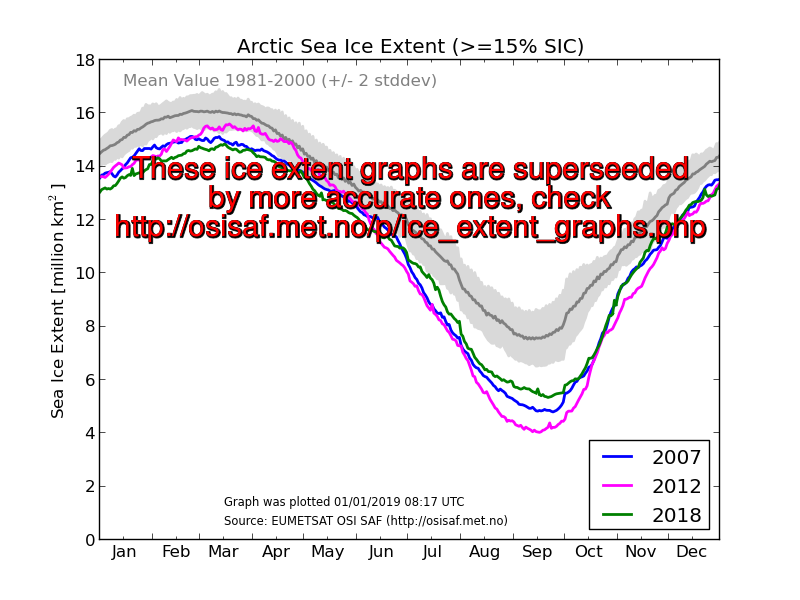 Time series of sea ice extent in the Arctic

Sea Ice Extent (SIE) is defined as the area covered by sea ice, that is the area of ocean having more than 15% Sea Ice Concentration (SIC). Sea Ice Concentration is the fractional coverage of a grid cell that is covered with sea ice. At hemispherical scales, SIE is often reported with units of 10^6 sq km (millions square kilometers).

In the EUMETSAT OSI SAF reanalysis project a consistent time series of daily, gridded data for SIC was made from the passive microwave sensors SMMR and SSM/I data for the period 1978-2009. This was later expanded so that the time series is now updated continuously with a one month delay. The consistent time series is combined with operational SIC data, and daily updated Arctic SIE graphs are made. The figure shows the SIE for the current year (black, bold line representing the continuous data set, and red line representing the SIE data based on the operational product), together with the SIE for the previous record low years 2007 and 2012. The mean value and standard deviation (grey line and light grey area) are based on data from the period 1981-2000. Please visit http://osisaf.met.no/p/new_ice_extent_graphs.php for references and more information.

Work on a new glacier inventory of Norway

Glacier outlines from 1970 and 2006 in red and yellow, respectively (data can be found in the CryoClim portal). In the background, a Sentinel-2 image from 16 August 2016 illustrates that the glaciers have been retreating significantly from the last mapping in 2006. Therefore, it is time to create a new glacier inventory of Norway based on Sentinel-2 and Landsat 8 satellite imagery from 2014-2018. Among many other glacier products, glacier outlines from Svalbard and mainland Norway will be mapped by the Copernicus glacier service (https://www.nve.no/hydrology/glaciers/copernicus-glacier-service/). This project is a co-operation between the Norwegian Water Resources and Energy Directorate, the Norwegian Polar Institute and the University of Oslo. Glacier products from this project will be made available through the CryoClim portal.